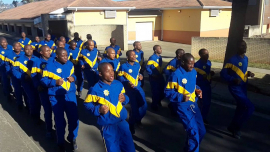 SAPS on Friday said the decision came after Cabinet’s decision to move the country to adjusted alert level 1.

The training, which had been scheduled to commence in March 2020, was suspended following the declaration of a National State of Disaster and nationwide lockdown that year.

“[They had already undergone the] selection process and were only awaiting the final stage where they were to be subjected to a medical assessment.”

Mathe said the basic training of new recruits involves extensive physical contact and with the challenges experienced with the COVID-19 restrictions that were in place “made it impossible for training to commence”.

Mathe said with the recommencement of the recruitment process underway, applicants who underwent all stages and were only awaiting the medical assessment, will receive an automated short message service (SMS) from the respective SAPS provincial recruitment offices, requesting them to report to a particular venue.

Here, she said, their fingerprints will be processed to determine their criminal status or previous convictions. Applicants will also be expected to bring along the following original documents, as well as three copies of each document:

For more information, applicants are advised to contact their nearest recruitment offices where they had submitted their initial application.

Mathe said it should be noted that this information is only directed to the applicants who applied during the said period and were subjected to all recruitment and selection processes and were only waiting to be subjected to a medical assessment.

The SAPS said it had noted with concern several hoax messages containing bogus job listing advertisements circulating on social media and other channels.

“The SAPS urges potential employment seekers to be wary of these fake job listing advertisements and not fall prey to any scam of this nature. The department has not advertised any posts for entry level police trainees currently and the public is encouraged to visit the SAPS website at www.saps.gov.za/careers and the Public Service Vacancy Circular (PSVC) for posts that are advertised,” it said. – SAnews.gov.za