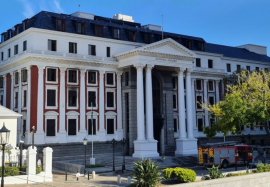 Parliament spokesperson Moloto Mothapo has confirmed this morning that the fire that flared up on Monday afternoon has now been contained.

On Monday afternoon, the Presiding Officers of Parliament noted with distress yet another flare up of flames on the roof of the National Assembly Building in Cape Town.

The almost two-day brave and courageous battle by firefighters against the flames that gutted various buildings of Parliament suffered a set-back when flames suddenly flared up from the roof of the Building on Monday afternoon.

Firefighters at the scene were reinforced following the sudden re-emergence of the raging fire. There were six firefighting appliances and a hydraulic platform, with 34 firefighters actively fighting the flames at the scene on Monday.

The resurgence of the fire follows earlier information from firefighters regarding the risky high temperature levels at the gutted buildings.

Mothapo said on Twitter this morning that there was a bit of positive news this morning. “… the fire flare up that occurred yesterday afternoon has now been contained. The roof where the flare up occurred and the third to fifth floors were destroyed. Twenty crew members remain on site to monitor situation and assess parts of the building.”

He said significant progress has been made by firefighters in the battle against the  flare up at the roof of National Assembly Building.

He said by midnight the fire had been drastically reduced. However, he said further damages were caused at several floors of the building.

The multi-agency and multi-pronged team of engineers, which arrived at Parliament on Monday was scheduled to begin with its investigative work.

The Presiding Officers continue to be encouraged by the resilience, courage and bravery of the firefighters in their battle to bring the fire under complete control. – SAnews.gov.za Jan 20, 2022
Looted funds to be recovered ‘by whatever means necessary’ – SAA Looted funds to be recovered ‘by whatever means necessary’ – SAA