Looted funds to be recovered ‘by whatever means necessary’ - SAA 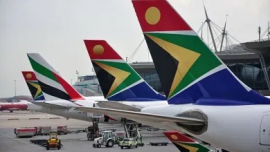 The interim board of South African Airways (SAA) says it will implement all of the recommendations of the State Capture report and subsequently go after those who embezzled any monies from the airline.

The first tranche of the report – which was released and handed over to President Cyril Ramaphosa last week – deals extensively with alleged corruption, fraud and looting at the State-owned airline and its subsidiaries, SAA Technical (SAAT) and SA Express.

“[The] Board commits that the findings and recommendations of the Commission will be immediately implemented throughout all levels of the company. This, it is believed, will foster a culture of transparency, accountability and ethical conduct within the SAA group.

“In the meantime, the Board is looking forward to the finalisation of Part III of the report, which will include a summary of the Report as a whole,” the board said in a statement.

The interim board said it will “take whatever actions” necessary to recover the assets and money lost from SAA as a result of the alleged corruption and fraud laid out in the report.

“Guided by appropriate legal counsel, the Board will cooperate with, and support law enforcement agencies in their pursuit of prosecutions, and where necessary, will institute internal investigations and disciplinary processes with the aim of cleaning the company of all vestiges of its shameful past as exposed in the Commission Report”.

The national carrier’s board reiterated its commitment to turn the ailing airline around.

“This Board and its Executive Management is constituted by professionals who were specifically selected on the basis of their non-association with the past of SAA. The principle focus of the board of SAA is to guide, advise and oversee the strategic management of the carrier as it emerges out of business rescue towards a sustainable and profitable future.

“This is underpinned by a driving ethos of safety and professionalism that always puts the customer first. This is also being done as SAA prepares to play a vital role ahead of the formal acquisition by a strategic equity partner,” the statement read. – SAnews.gov.za