Health Minister, Dr Joe Phaahla, has urged citizens to not let their guard down and vaccinate as the number of new COVID-19 infections is on the rise.

South Africa recorded 11 535 new Coronavirus cases in the past 24 hours compared to the 2 465 that was recorded on Thursday last week.

“The numbers over the last seven days and the curve depicting them, there is a much steeper upward curve than has ever been seen in the last three waves,” the Minister said on Friday.

In addition, over the last seven days, the spike that started in Gauteng has now spread in all nine provinces with numbers increasing in the Western Cape, KwaZulu-Natal, Limpopo, North West and Mpumalanga.

Free State and the Northern Cape are still the only two provinces that are seeing low numbers, he said.

Meanwhile, Phaahla said preliminary data shows that the new Omicron variant was highly transmissible, including infecting people who are vaccinated. However, causing mostly mild illness, especially among the jabbed.

“At this stage, the trend is a rapid rise in cases but we hope mild cases will continue to dominate.”

He told the media that those who are not jabbed and young people below 40 years, most of whom have not received the vaccine, dominate hospital admissions.

According to the Minister, Gauteng, which is currently the epicentre, is working with the national team to ensure the provision of services for those who will become seriously ill.

He also raised concerns about healthcare workers who may catch the virus and isolate, which will lead to staff shortage.

Phaahla pleaded with citizens to be more vigilant and apply all the health and safety measures.

“While we’re saying, ‘what is government going to do?’ I think all of us individually and collectively, we could even reduce the level to which even regulatory intervention could be required by simply especially, just the wearing of masks.”

The key factor, according to the Minister, was to avoid big gatherings such as end of year functions and birthday parties, especially if they are indoors.

Meanwhile, Phaahla urged people who have tested positive or are still waiting for their results to stay at home.

“Going to queue whether it’s for medicines or groceries is very irresponsible. We should, all of us, condemn that and advise people to keep away from mixing with other people.”

The Minister has described vaccination as not just an option but also a matter of saving lives, livelihoods and the lives of health workers and the nation as a whole.

He once again used his platform to call on everyone above the age of 12 to get the jab.

“This fourth wave which we have started can be managed without too many casualties and loss of lives, if we observe safety measures, the biggest risk being gatherings especially indoors,” he added.

Above all, he said lives could be saved if eligible people are inoculated.

“While there are still many questions around Omicron, the evidence thus far is clear that like all previous variants, our best protection against serious illness and death is vaccination.” – SAnews.gov.za Adjusted Level 1 and what it entails. 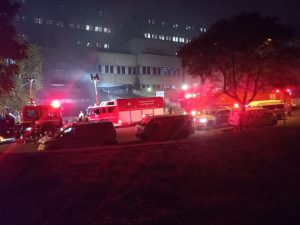