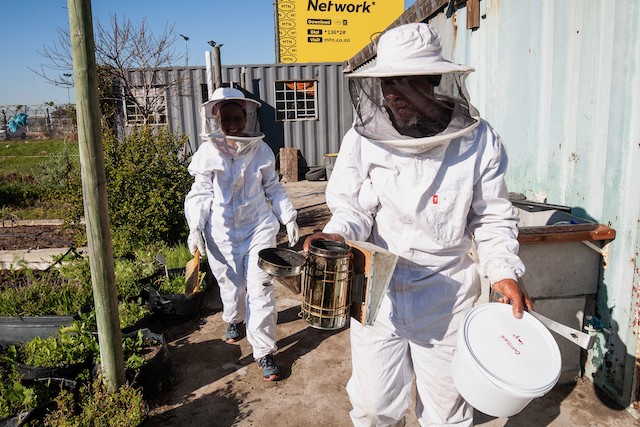 Sheila Besten, who is an assistant at the Asande Community Garden, sometimes helps Vuyo Myoli in his beekeeping business.

Near a roaring train line and informal market in Gugulethu, the unexpected sound of bees buzzing can be heard from a nearby high school. But these are not wild bees. They belong to Vuyo Myoli, who has set himself up with a small urban beekeeping business.

“I’m a farmer by day and artist by night,” says Myoli, a musician who started beekeeping two years ago.

Myoli has a small honey business called Beez Move. He has two active hives at the Gugulethu Intshukumo Comprehensive High School, alongside a community garden.

“The idea is to give a free pollination service to these market gardens,” says Myoli. With the hives placed near the gardens, bees nourish and pollinate the crops. With the knowledge he has gained from mentors over the past three years, he also wishes to educate his community. He runs workshops in agriculture and beekeeping.

“They think bees are enemies,” says Myoli. “Bees are friendly. They react to what you are doing. They don’t just attack you.” 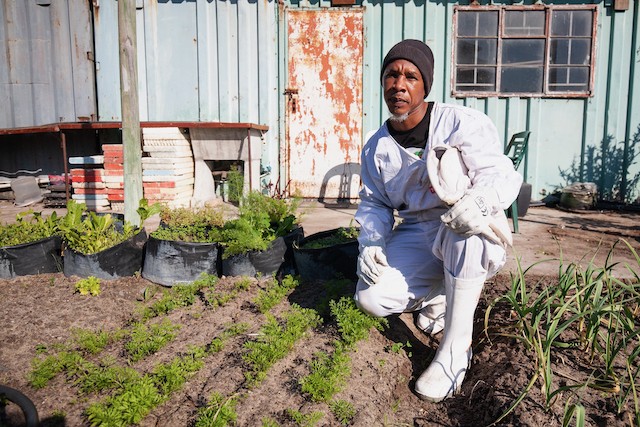 Myoli said he fell into a deep depression around 2014, because of the ups and downs of the music industry. “I needed something that would keep me grounded,” he says.

In high school, he learnt about agriculture. These lessons came back to him, and in 2017 he started with small gardens in his community. It helped him out of his depression.

“To touch soil is therapy,” he says.

When he reconnected with an old musician friend from Stellenbosch, who is a beekeeper, he was introduced to apiculture. 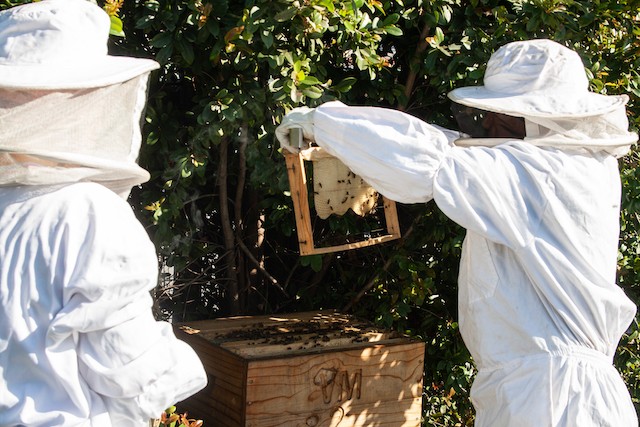 Myoli says most people think gardening is for old people. “They don’t realise that is a very important thing. It’s part of our food security.”

Apart from honey, bees produce wax which can be used for medicines, soap and hair products. Bees also produce a product called “propolis” which they create in order to tightly seal the hive and which has medicinal value.

As an artist, Myoli says that honey is necessary backstage to “clean your throat” and “boost your vocal cords”.

When he started, his first bees died. “I removed them in winter,” he says. He wasn’t sure what they needed to eat.

He has also had to deal with vandalism. Recently, someone jumped over his fence and tried to steal his hive.

“When you’re keeping bees in the wild you’re worried about baboons. I thought that we’re safe in the township until the incident happened,” he said. 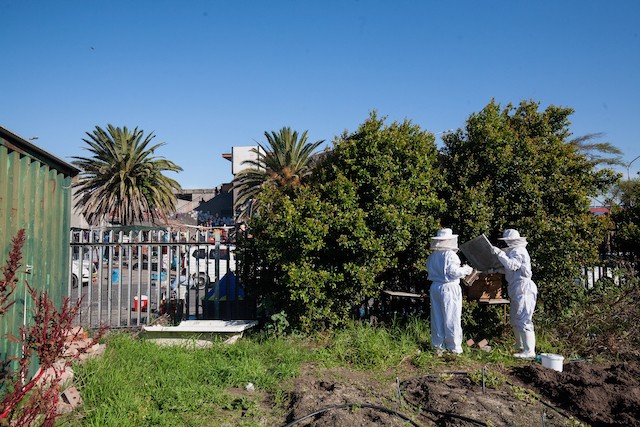 Beez Move is near a train line and informal market, on school grounds. But Vuyo Myoli is planning to move his business to the Manelisi Urban Farm in Gugulethu where he hopes to expand it.

In Gugulethu, space is an issue for keeping bees.

“Not a lot of people will allow you to place bees in their areas,” he says.

He says he has never been stung by a bee, but the volunteers he works with have. “I don’t know … maybe they know my smell,” he says.

He mostly sells to early childhood development centres through the Violence Prevention through Urban Upgrading and the Cities Expanded Public Works Programme of which he is a part.

In spring, Myoli will be moving his operation to Manelisi Urban Farm in Gugulethu. His goal is to expand his business to 40 hives and start producing wax and propolis products. To do this he needs hives, extractors and a container to house his business.