By Tabelo Timse for amaBhungane 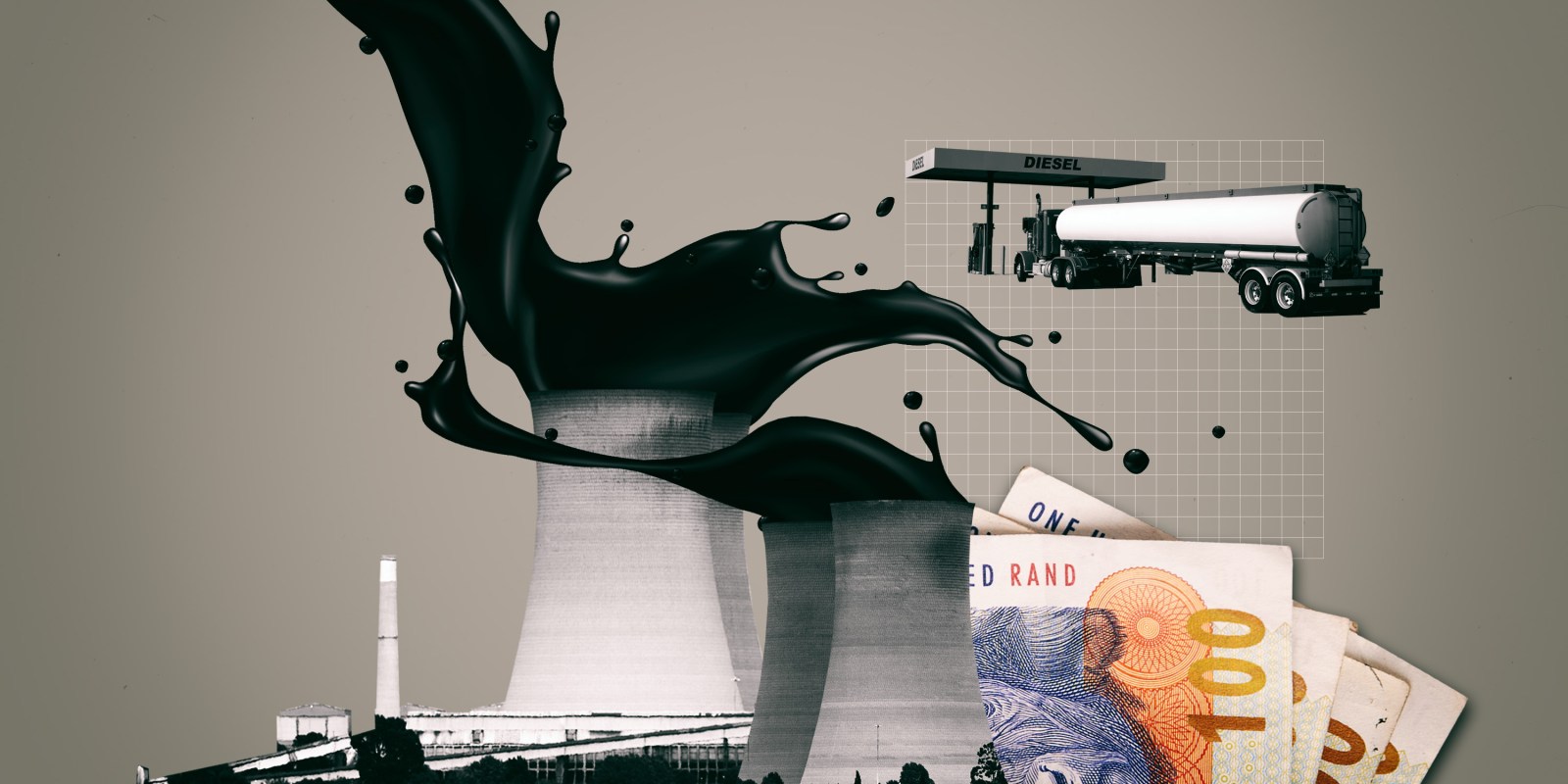 A sophisticated crime syndicate – in cahoots with Eskom officials, police and trucking companies – is stealing fuel by exploiting a design flaw at the Kriel Power Station in Mpumalanga. And it all has to do with a weighbridge on the wrong side of a gate.

In March, amaBhungane revealed how armed gangs were stealing fuel from buried pipelines owned by Transnet.

After the story was published, we received tip-offs that led us to another fuel theft operation, at Kriel Power Station, which has evaded detection for many years.

In coal-fired power stations, fuel oil is used at start-up or during unstable furnace conditions to ignite or stabilise the coal flame.  At Kriel, the fuel oil is stored in four storage tanks with a combined capacity of 1 350 tons.

But as fuel prices have soared, fuel theft and cross-border fuel smuggling are increasingly attractive, placing even more pressure on Eskom when the utility is already struggling with crippling electricity blackouts.

Kriel: a hub of fuel theft

The Kriel Power Station, located between the towns of Ogies and Kriel some 100km east of Johannesburg, was commissioned in 1979. At the time it was the largest coal-powered station in the southern hemisphere, capable of generating three gigawatts of power. But it has a fatal design flaw.

As one truck driver put it: “Unlike other power stations the weighbridge is outside, not inside the Eskom yard. This gives a chance for trucks to drive to other locations to offload and then come back to weigh.”

The driver, who did not want to be identified, also said security was lax at the station “because as long as you have documentation they don’t even check inside the truck … security lets you pass”.

Other sources claimed that officials at the power station did not supervise how much fuel was ordered. Said one: “If there was proper control on the amount of fuel being ordered, then surely someone would have picked up that the numbers don’t add up. There are lots of trucks from various companies delivering fuel even though the coal is dry and there is no need.”

According to three drivers amaBhungane spoke to, a full tanker is usually worth between R500,000 and R1-million, depending on the size of a tanker and the type of fuel. On the black market, the minimum price for the load would be R250,000.

One of the sources said: “How it works is that let’s say in a six-day period, we deliver plus-minus 15 loads to Kriel, then about half of that product will go to the black market.”

He said how much was skimmed off depended on the level of reserves in the storage tanks, because it would raise suspicions if the tank ran dry.

AmaBhungane has also seen bank statements from a driver who claimed that the controller (a middleman between the driver and the Eskom operator) was paid a standard fee of R3,000. The driver and operator would get R9,000 each from a single load.

Payments were received and made via cash deposits at ATMs, making them difficult to trace.

This driver said a police officer regularly escorted the stolen fuel.  The officer would be paid directly in cash by the black market buyer.

An Eskom tip-off and an arrest

Luck ran out, however, for truck driver Douglas Ndivhatzo Ralulimi (39), who was arrested for theft on 18 March outside Kriel Power Station, where he was allegedly caught with a tanker full of stolen fuel. He is currently out on R10,000 bail.

Mpumalanga police spokesperson Brigadier Selvy Mohlala said another suspect, Blessing Ngubo, who worked at the power station, died in a car crash shortly after Ralulimi was arrested. A source described the circumstances of the crash as suspicious, because “he did not hit anything, his car just overturned”.

Ngubo was an operator responsible for the loading and offloading of fuel from tankers.

The theft case has been taken over by the Hawks, who would not comment on a live investigation other than to say that the arrest was made after a tip-off from Eskom’s own internal investigators.

Eskom’s media department also did not want to provide details on the case except to state that they were aware of the fuel oil theft, and that it was through Eskom’s own initiatives that the arrest was made. Investigations are currently under way.

Responding to claims that there were no tight controls and accountability on fuel orders, Eskom said fuel was ordered through “National Control” via a daily planning process.

Eskom’s statement said, “The fuel oil trucks are weighed at the coal plant weighbridge and come to the station for offloading. The operators take readings before offloading and after offloading to account for the amount that has been offloaded, then the tanker goes back to the weighbridge for weighing.”

Eskom did not explain why the discrepancies between recorded delivery volumes and actual fuel consumption were not picked up.

Nor did the utility respond to questions about the security issue caused by the weighbridge’s location outside the Kriel perimeter.

How it’s done: the modus operandi

Amabhungane’s sources say the thefts are facilitated by managers and controllers working for trucking companies, as well as operators at the power station. Of course, there is also a buyer.

Controllers at the trucking companies will assign favoured drivers to deliver fuel to Kriel, usually from the Natref refinery in Pretoria. Early in the morning or the night before an order is delivered, the controller will alert the drivers about a black market order.

Said one driver: “We load mostly around 10am but make sure not to load after 4pm as the refinery closes after that. If you load too early then you must make sure you waste time because you can only reach the power station at night,” said the driver. That is because the syndicate’s operator only starts his shift at 8pm.

The operator tells the driver to go to the weighbridge, which is outside the power station gates.

“Then after weighing, the operator tells you to come in and then you go through access control security checks.”

At the security checkpoint, all that is required is to show a shipment slip – a document that has details of what is inside the truck.

There, the driver will offload only enough fuel to pass a quality control check and make it appear that normal offloading has happened.

The crooked operator gives the driver a slip to confirm that the fuel has been delivered and the truck is driven out of the gate, allegedly bound for the weighbridge.

Instead, the truck driver calls the illegal buyer and waits at the side of the road for a small private car to appear.

The trucks are equipped with cameras to monitor the drivers and prevent theft.

But in this case the driver switches off the live camera, allowing a passenger from the small car to jump inside. The passenger is equipped with a signal jammer and it is alleged that officials at the trucking company, who ought to be monitoring the cameras, turn a blind eye to the lost signal.

The passenger then directs the truck to an illegal offloading spot, usually a closed yard a few kilometres away.

At the illegal loading site, there is a second, empty truck, coupling pipes and a generator.

After offloading the fuel into the second truck, the truck driver goes back to the weighbridge outside the Kriel Power Station, which will confirm that the tank is empty and that the job has been completed.

According to research by the Global Initiative Against Transnational Organised Crime in a 2020 paper on fuel smuggling, Zimbabwe is a favoured destination for smuggled fuel from Mozambique, South Africa and Botswana.

Some smugglers use boats to carry fuel purchased in Mozambique across rivers that flow into Zimbabwe, the study said.

For larger-scale smuggling, tankers with false documentation – ostensibly carrying commodities such as soy oil, which are not subject to duties – are also used.

Reports of fuel stolen in transit have also surfaced elsewhere in the region, such as the Maputo Corridor, where Mozambique, eSwatini and South Africa converge.

Revenue authorities in Zambia have uncovered large-scale scams involving tankers transporting illicit fuel from Namibia and Mozambique. During one incident in 2018, 60 trucks were seized in Zambia carrying illicit fuel.

In South Africa, joint operations by Transnet and Eskom have resulted in several arrests and seizures of private vehicles and tankers.

In Mozambique, a tracking programme was launched in May 2018 involving marking fuel with an invisible chemical, which allows authorities to more easily identify fuel which has been adulterated by bulking up with cheaper kerosene.

Within six months, revenue collection increased by 32%. A corresponding 60% reduction in kerosene sales indicated its widespread use as an adulterant, and further indicated a potential decline in adulteration.

According to the research paper, the sudden rise in fuel thefts, particularly in South Africa, is a new shift in fuel-smuggling dynamics in the region.

Smart policy decisions, such as Mozambique’s successful fuel-marking initiative, and greater regional cooperation between revenue and law-enforcement bodies, may prove useful in countering this growing problem, the study suggested.

The amaBhungane Centre for Investigative Journalism is an independent non-profit organisation.  For more, visit www.amaB.org.