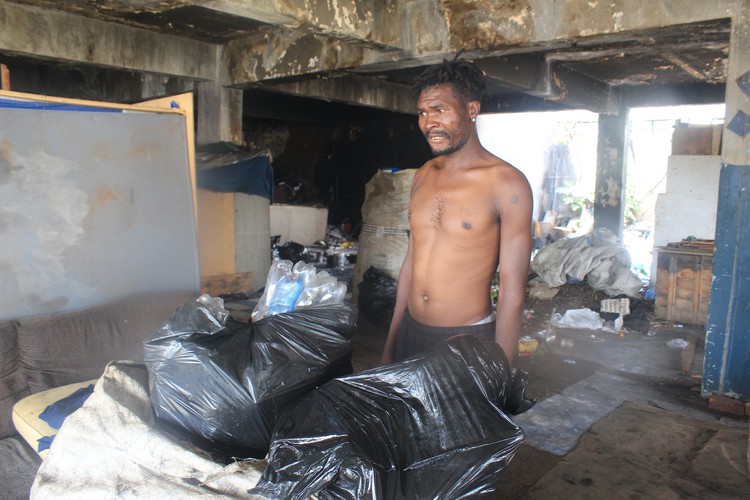 Reclaimer Raymond Serumula was one of the first people to erect a shack in the building. Photos: Mosima Rafapa

Years ago, the building on the corner of Hertzog Street and Steve Biko Road in Wonderboom, Pretoria, was a panel-beating workshop. Waste collectors used to sleep nearby to be there early to collect metal for recycling. Then the panel-beaters moved out and the recyclers moved in. Now they face eviction from the building, which belongs to the City of Tshwane.

The threat of eviction hangs over the heads of the 12 families living in what they refer to as “the MeatKing building” in Pretoria. Some have been there for many years. The City obtained an eviction order in 2018 and intends to apply it soon.

Raymond Serumela moved into the building, named after a shop across the road, five years ago. Originally from Mpumalanga, he came to Pretoria to look for work, and when he couldn’t find a job he started collecting waste for recycling, especially scrap metal from the panel-beating business. “On Thursdays, we used to sleep on top of cardboard boxes in the front of the building in order to book scrap material discarded from the cars. We knew that if we slept here, we’d be the first in line. I was staying at an informal settlement in Bosman so it was far to travel,” said Serumula.

When the panel-beaters moved out, he says, the building fell vacant and he moved in. “We then started living here. More people joined us,” said Serumula. 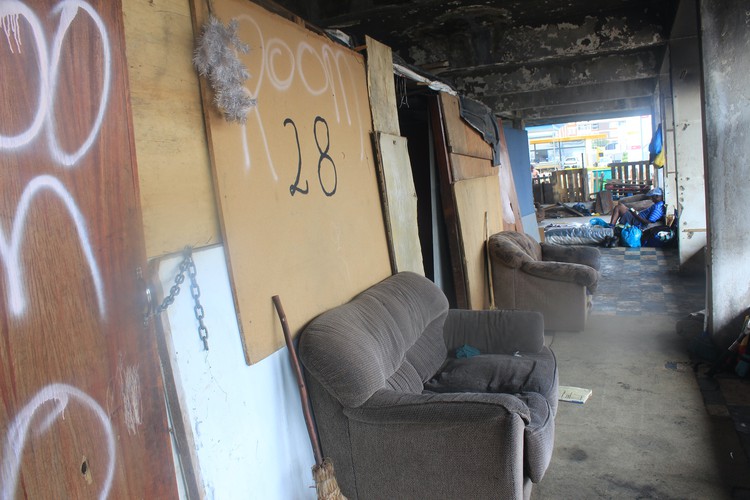 Some of the residents sleep on couches in the corridor. Others have built shacks.

Serumula’s partner, Simphiwe Shabangu, left her home in Soweto 14 years ago when she was 20 and lived in parks. She said she was tired of being harassed by Metro law enforcement and moved here. “It’s better here than living in public parks,” she said. The couple live with their baby in a two roomed shack, one of many erected inside the building.

“I look at my son and I can only say beautiful things about his future. Life is hard but I have to hope for the best for him,” says Shabangu.

Shabangu is unemployed and relies on social grants and her partner.

Most of the people living in the building used to live in parks. During the day they would hide their belongings and go to look for work or waste materials for recycling. When it rained, some slept on the veranda of the MeatKing building, and went back to the nearby park to wash in a stream. 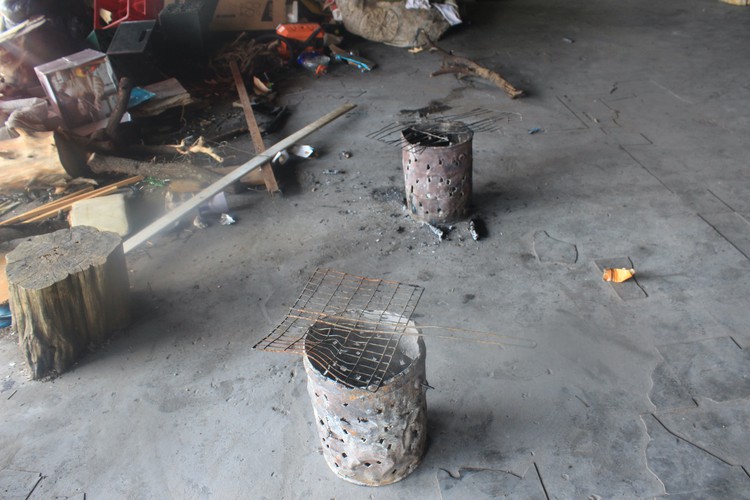 There is no water in the building, no toilet and no electricity. Residents use open fires to cook, imbawulas (makeshift brazier) and paraffin stoves. They use one toilet in a building opposite theirs and get their water from there as well. 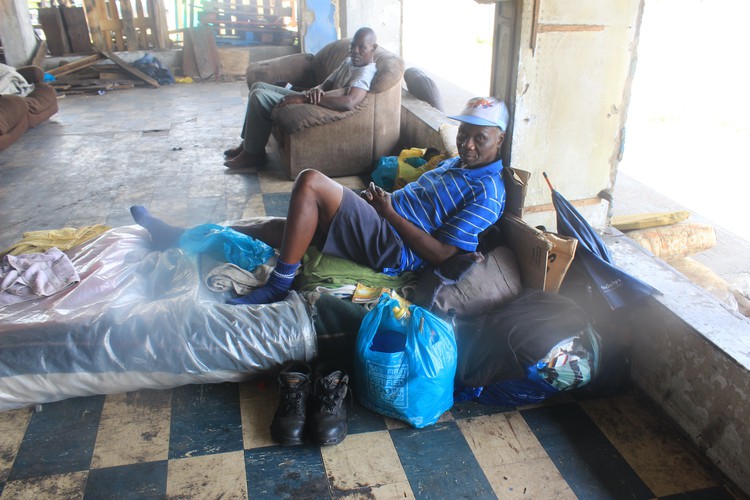 Nico Ntjana started sleeping outside the building in 2017 because he could not afford to pay rent or travel. Next to him is Peter Baloyi from Limpopo. Both survive on piecemeal jobs.

Nico Ntjana is from Hammanskraal. He moved in 2020. Before that he slept outside on a makeshift bed at night and spent time at a park in Gezina where he cooked and washed in a stream.

“I sleep here because I’m in town looking for piecemeal jobs. I do general work in the suburbs of Villieria. I lost my job in 2016 so piecemeal jobs keep me busy. It’s expensive to travel from home. What I do is not stable. Some days I’m unable to find work. My wife understands that I have to do this,” he says.

Lesego Mmotlana runs a carpentry business and displays his items just outside the building. He used to work as a carpenter in Rustenburg and moved to Pretoria in 2017 and to MeatKing in 2021. “I also do general work so I’m able to pay R500 rent for a room in Mamelodi where I store my belongings,” says Mmotlana.

He has four children. “I’m doing this for them,” he says. 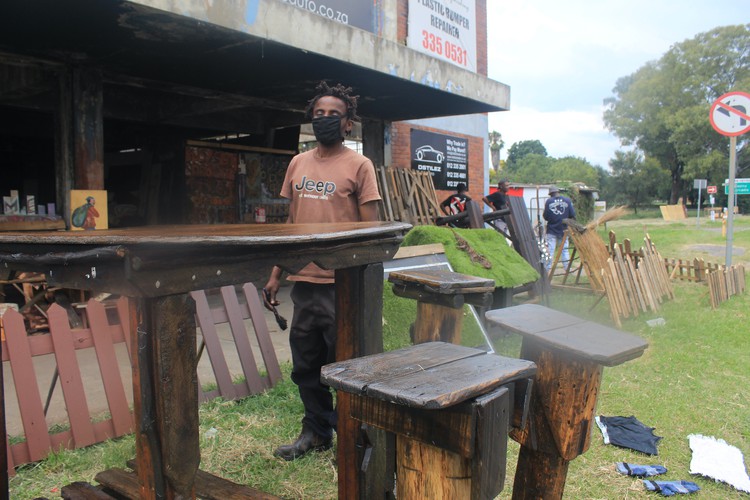 Carpenter Lesego Mmotlana displays his wares outside the building.

Abraham Mahlangu is from Mpumalanga and works as a security officer in Rosslyn. He lives in a one-room shack in MeatKing to avoid paying rent, and to be able to send money home to his wife and five children. “I used to pass this place when I came to look for work. When they offered me the job in August last year, I came back here to look for a place to sleep,” he says. Mahlangu recycles waste to earn extra money. 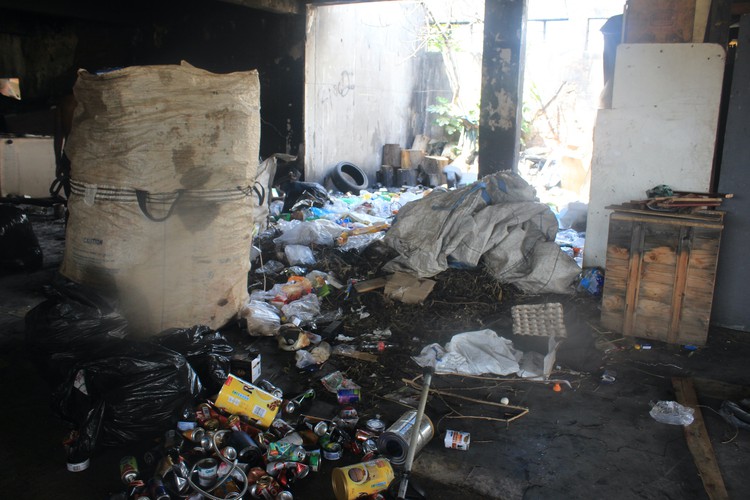 Many of the residents are waste pickers and collect materials for recycling.

Tshepo Matlala was one of the first to occupy space in the building. He says when he could not find work after looking for some time, he resorted to recycling waste for a living. He lives with his partner, Priscilla Mgidi, who helps him pick waste for recycling. “Public transport is expensive so this is the only option we have,” he says.

Tshwane metro spokesperson Lindela Mashigo said the City had signed a contract with a developer for the building, and was waiting for the sheriff to implement the court order.