“When you complain, you speak to robots” 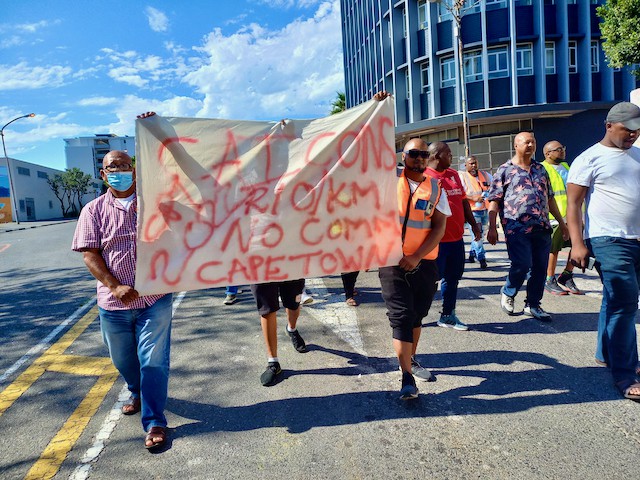 Drivers from various e-hailing companies marched to the Department of Trade and Industry and Competition and the Department of Transport in Cape Town, as part of a national three-day protest. They are demanding more pay and that government regulate the industry. Photo: Marecia Damons

Drivers for e-hailing services embarked on a three-day protest action on Tuesday demanding regulation of e-hailing platforms such as Bolt, Uber, Uber Eats, Indriver and DiDi. The work stoppage was prompted by rising petrol prices and issues over workers’ rights in the e-hailing industry that have been simmering for years.

Surge pricing was noticed on Bolt and Uber on Tuesday and Wednesday. Although prices were high, drivers were operating.

On Tuesday, over a hundred e-hailing service drivers marched through the streets of Pretoria, disrupting traffic on their way to the Union Buildings and the Department of Trade, Industry and Competition (DTIC). About 50 drivers marched in Cape Town from Hanover Street to the provincial department of transport, and the department for trade and industry offices.

“Petrol prices keep going up but the prices of the trips on the Bolt app remain very low … We want the government to regulate these apps and recognise us as workers.”

“We work very hard and only get peanuts as payment. It’s painful to spend over 12 hours driving and not see anything at the end of the day,” said Johannesburg-based Bolt driver Razak Ole.

“The owners of these cars also expect certain targets from us. We have families and children to feed. We are being used by the system. The government must urgently help us, because these are careers to us,” said Ole.

Melithemba Mnguni, of the Unity in Diversity organisation, said, “No one is going to sort out our issues if we don’t act.”

A memorandum of demands addressed to President Cyril Ramaphosa, Gauteng MEC for Transport Jacob Mamabolo, and the transport MECs of all the provinces, stated: “The app companies and operators should be regulated. The president should compel the minister of transport to engage with the e-hailing community.”

The memorandum said, “The sector started engaging the Department of Transport since 2016 and has reached out to the minister including submission of two memorandums yet no response.”

The Private Public Transport Association (PPTA) national spokesperson Vhatuka Mbelengwa said, “There was nothing to take away from the meeting yesterday. The MEC wants us to go back to mediation. We don’t want that. We want the government to regulate how Bolt behaves and also how safety will be regulated,” he said.

Drivers want a minimum rate of R13 per kilometre and R50 a trip, and for the e-hailing platform providers’ commissions (which are 25% and higher) to be reduced. They are also calling on the e-hailing providers to take responsibility for damages incurred, such as hijackings and robberies, while on duty.

“We need to focus on finding a win-win situation for us and for them,” he said.

Nazeem Minnies, who has been working as an e-hailing driver for more than five years, said petrol price increases have made life hard.

“How are they expecting us to survive? It’s not even a benefit to do this anymore … There isn’t even an office we can go to. When you complain, you speak to robots. So we don’t get the responses that we want because there isn’t an opportunity to have an open dialogue.”

“With the expected fuel hike next month, we won’t be able to survive and continue doing the work that we do,” said Sophie Fritz.

Chief of Staff at the DTIC Labeeqah Schuurman received and signed the memorandum in Pretoria. When the marchers arrived at the Union Buildings the executive meant to receive their memorandum had left. An official from the office of the President came and received the memorandum. The memo was accepted in Cape Town by Mario Erasmus, an official of the Department of Transport, and by Mark Alard, regional director of the DTIC.

GroundUp asked Uber and Bolt for comment but had not received a response at the time of publication.

Gauteng Department of Transport spokesperson Melitah Madiba told GroundUp that the department agreed with the e-hailing drivers on some of their issues. She said the department had employed a mediator to sit down with both the drivers and the app owners and find common ground.

“That process is still ongoing and the advocate mediating on this will give us feedback,” she said.

However, the drivers’ memorandum said: “The Mediation process initiated by Gauteng MEC Mr J. Mamabolo, on 26th May, 2021 failed dismally.” 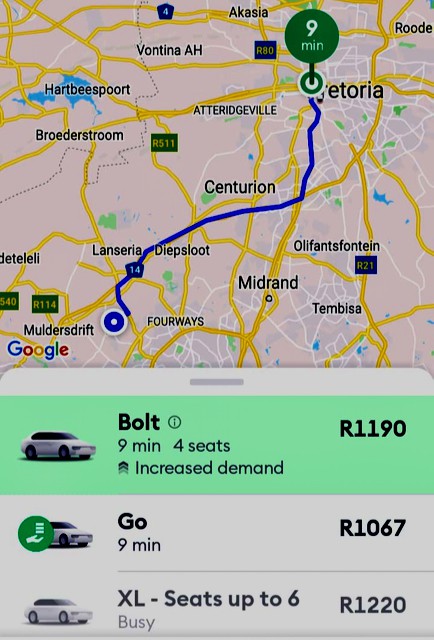 Prices on Bolt surged in Gauteng on Tuesday morning and were still high on Wednesday, about two to three times the normal rate. Above: a screenshot for a trip from Pretoria to Cosmo city that normally costs about R300.

In a lengthy reply, Bolt said, “The e-hailing sector is distinct from other modes of transport in that drivers on our platform are individual micro-entrepreneurs and have the ability to raise their concerns directly with us.”

“When setting prices, Bolt balances drivers’ earning needs with affordability for passengers. More people will choose to ride with Bolt if rates are affordable, which means that drivers have more opportunities to earn money.”

“Bolt increased its rates by up to 20% in March 2022, with increases implemented on the minimum fare, start rate, per kilometer rate, and the trip cancellation rate.”

“We are continuously developing safety features and tools … This includes a partnership with Namola via an in-app integrated SOS emergency button that shares the driver’s details and location with Namola’s 24/7 call centre, and then deploys private security and emergency services immediately”.

May 6, 2022
Seven million people have applied for the R350 grant since Saturday

May 5, 2022
SA makes progress despite challenges